You are here: Home › 9panels › Adventures in Nine Panels: Volume 1 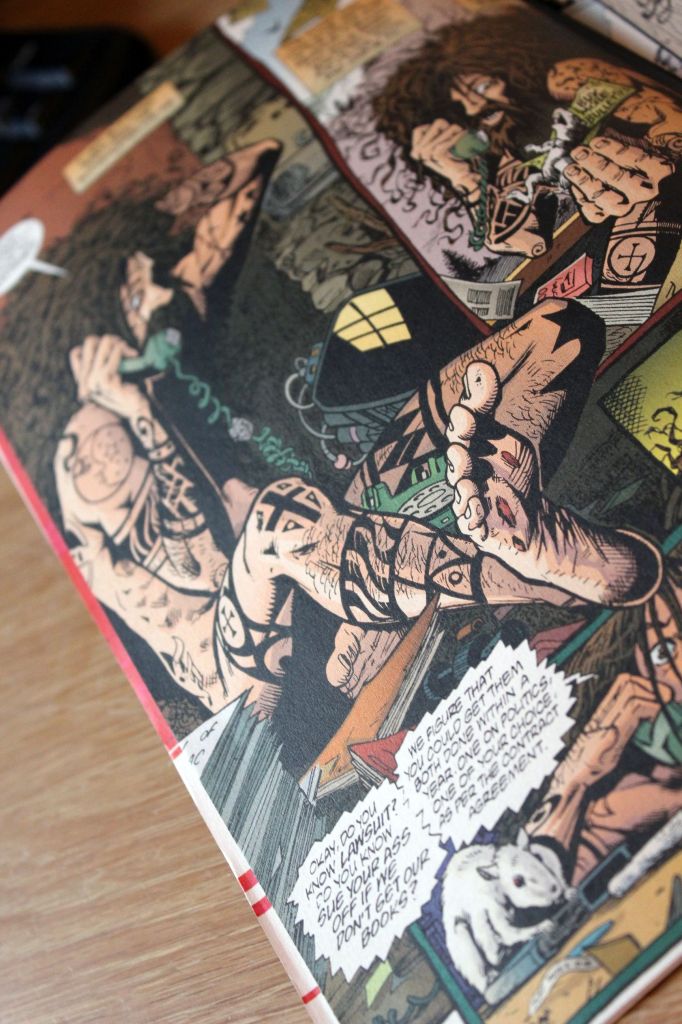 Two things stood out about this book: the detailed, intricate artwork and just how fucked up a world Warren Ellis has created.

Those two things go hand-in-hand. Ellis’ setting drips with bleak visions of the future, where cities swell with consumerism, drink, drugs and sex and appear entirely absent of morals. It’s the perfect playground for Spider Jerusalem – a futuristic gonzo journalist – who returns to the urban sprawl to cover stories and write books. Spider is brazen, bold and vicious, and it’s intriguing to read a character who is so overtly, well, bad. 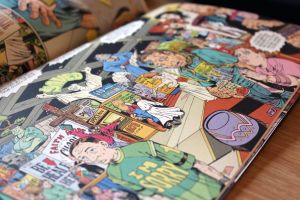 I understand that it’s the first of ten volumes, and so I’ve just put a tiny toe in the water, and it feels like I’ve read more scene-setting and world-building than I have actual plot – in the first volume the issues seem to revolve around small developments, like Spider covering a riot, infiltrating a presidential press conference or interviewing an old acquaintance.

When the world is this vivid and imaginative, though, I don’t mind. I’ve already bought volume two, and I can’t wait to get involved.

My first comics were A Song of Ice and Fire prequels, so I barely count those – I knew I’d like the stories, even if the format was new. Once they were done, I decided to start at the top: Watchmen.

It was initially overwhelming, with two groups of characters that hop between the 40s, 60s and 1985 in a complex, multi-faceted plot.

There is a reason why it’s got such a stellar reputation, though, and its quality soon emerged. The writing is urgent and exciting, the art is punchy and detailed, and the characters are worth exploration. That plot, once confusing, became rewarding and surprising. The prose extras at the end of each issue add context and backstory, and there’s even another comic to read inside this one.

It’ll undoubtedly improve with repeated readings. In fact, I’ve already read it twice – and, once I’d finished my first run-through, I delved into Watchmen’s Wikipedia entry to explore the plot, characters and history. Suffice to say, I’ll be back. Brilliant.

Star Wars: In the Shadow of Yavin 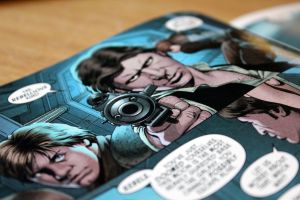 I bought this on a whim, but I only remembered afterwards that Disney/Marvel jettisoned the extended universe in April 2014 – so this story no longer counts, even though it was only released in January 2013 and itself ignored events that took place outside A New Hope.

It’s still a fun read, but it’s formulaic, and its non-canon status dulls its sheen – I can’t help but think I’m wasting my time with a book that’s not real, albeit in a fictional universe where people fight with laser swords and mind control! 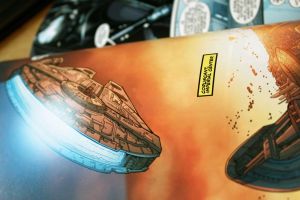 Soon after, I picked up the first issue of the new Star Wars comic – the first one released into Marvel’s new canonic galaxy – and it kicks off with the classic logo and story scroll. It’s a great introduction to a new story featuring familiar characters, all of whom have a couple of bad-ass moments: Luke uses the force, hears Ben and confronts Darth Vader, Leia smacks an imperial commander right across the chops, and Han is, well, Han.

The art takes inspiration from the movies, so the characters look spot-on, and there’s plenty of movement – I could also hear the swoosh of lightsabers. Artist John Cassaday cleverly divides many of the pages into widescreen panels, too, to mimic a movie experience. 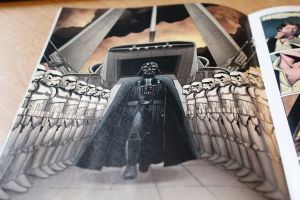 I’ve already picked up and enjoyed issue two, which had some fantastic action scenes, and I can’t wait to read the new Darth Vader and Princess Leia books.

A couple of friends raved about this book, and its cover was intriguing: the art seemed more elegant and mature than Transmetropolitan, which I’d read previously. Transmetropolitan is a weird, intense read, so a total change of pace – and art style – proved appealing.

By the end of the first volume I was hooked. Saga’s art is sumptuous, with colourful environments that pop from the page and deft lines that convey complex emotions. 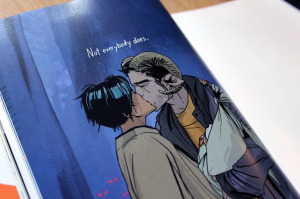 I love the plot as much as I love the imaginative setting: two soldiers are in love despite coming from opposing sides in a planetary proxy war. They’ve got a child, they’re vigilantes, and they’re on the run in a wooden spaceship, chased across the weird, imaginative galaxy by a variety of shady characters with horns, wings, computerised heads, multiple arms and more.

Saga’s plot could have suffered from immature, happy-ending indulgence, but writer Brian K Vaughn pulls few punches – some characters are vile, some rescue others from vile, unimaginable situations, and this feels like a story that’ll disappoint those who yearn for happy endings.

I rattled through the first four volumes, and now we’re onto single issues, and I’m buying them too. I just can’t wait for the next volume.

I didn’t quite click with this one, despite several recommendations from friends and a great pedigree – after all, it can’t get much better than writing by Neil Gaiman. The premise jumps around superheroes, the occult, mythological figures and other fantastical elements, which is certainly unique. 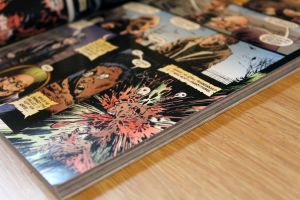 The five issues in volume one felt disjointed, which made sense when I finished the end of volume one; in his notes, Gaiman writes that he tackled each individual issue with a different theme and genre in mind. That meant issues felt coherent – but, to me, the whole didn’t quite match up.

I had mixed feelings about the art, too. Several artists take to Sandman’s pages in the first volume, and their layouts are rich with imagination, but I wasn’t keen on some of the art. It sometimes seemed cramped and busy, full of lines and detail that didn’t seem to convey much texture, motion or emotion. Transmetropolitan seems busier but with purpose, while Saga uses less detail but conveys more with careful lines and expressions.

I’m sure I’ll buy volume two and beyond, especially because Sandman has such a brilliant reputation but it’s not one I’ll return to immediately – especially when I’ve got Saga, Transmetropolitan and Star Wars to read.