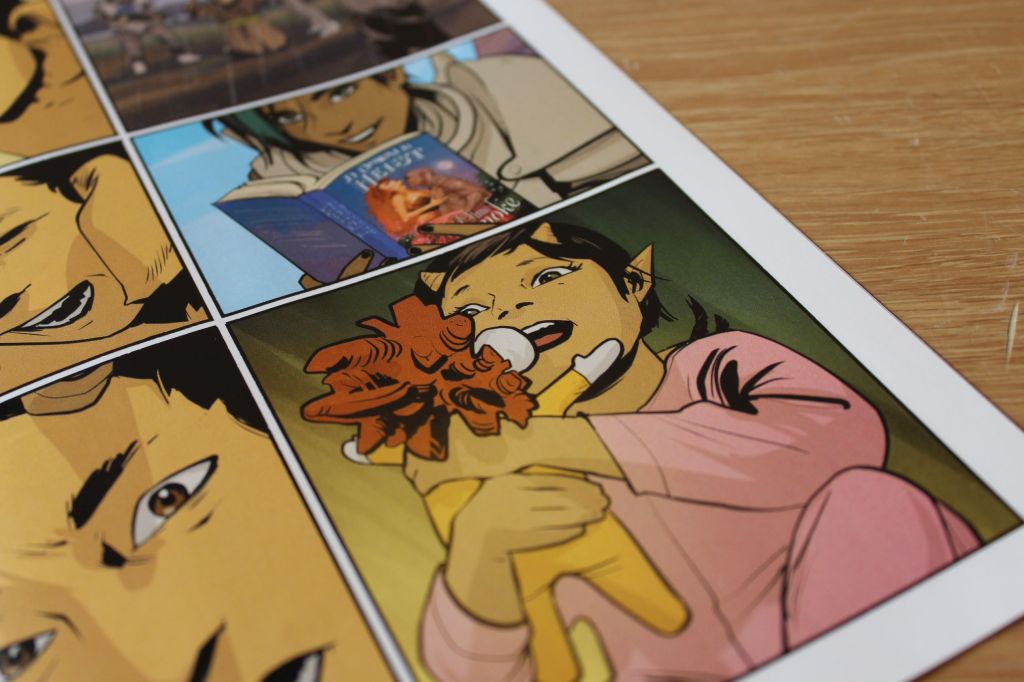 I burned through the first four volumes of Saga rapidly, and it’s so good that I’m not waiting for volume five – I’m buying the single issues instead. I bloody love it. 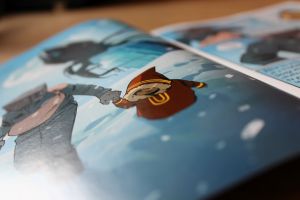 The story resumes with terrorist Dengo leading Hazel into freezing snow, but not much happened in #25; Alana and Klara argued as writer Vaughn recapped their situation, and we joined Marko, Prince Robot and the brilliant Ghus in their spaceship – also arguing, also recapping.

The methodical #25 fed well into a busier #26, with a first-page fight illustrated by lurid colours that help this issue stand out. There’s surprise when Gwendolyn, The Brand and Sophie catch up with native wildlife, and fear as Alana and Klara deal with Dengo’s revolutionary friends.

Marko, struggling with being apart from Alana and Hazel, lashes out then succumbs to the same drug-addled state that caused Alana’s previous problems. 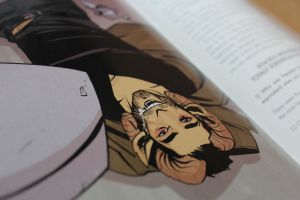 The end of #26 is a sad, shocking cliffhanger involved Marko, and it’s the sort of ending that Saga does so well, with emotional attachment and evocative artwork that draws you into the page.

#27 provided much-needed exposition about Marko’s past, with drug-induced flashbacks interrupting his panicked companions. It’s a simple idea – some pages in the present, some in the past – but its slick execution made this another great issue. 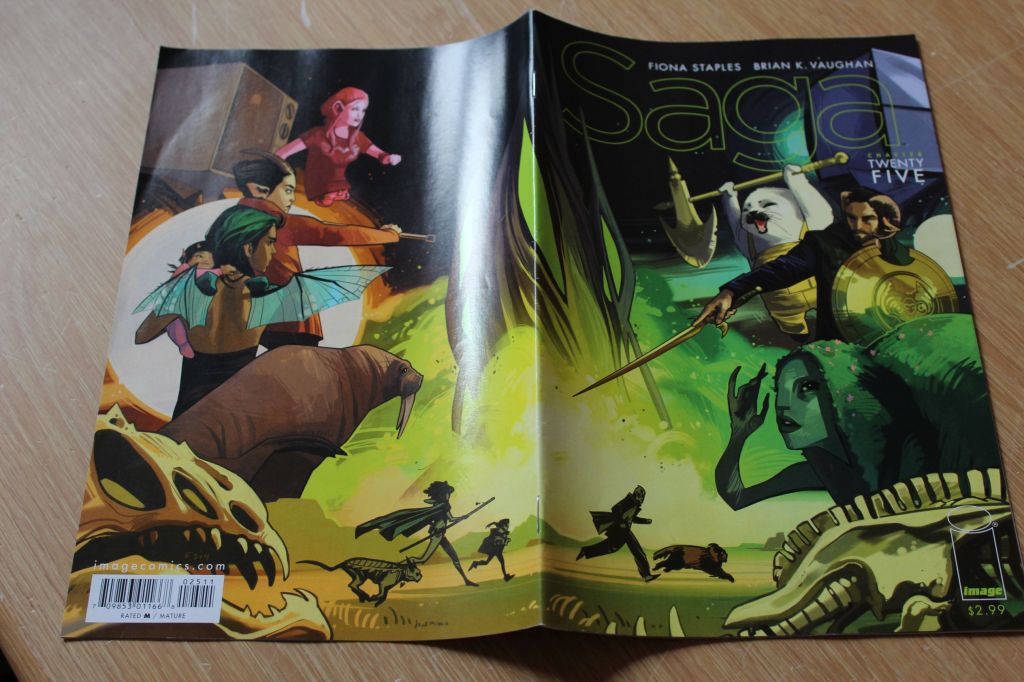 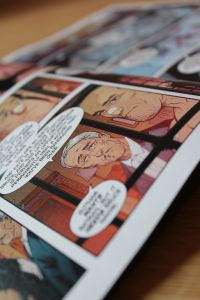 Arkham Knight serves as a prequel to the upcoming videogame, and there’s no real gap between the end of Arkham Origins and the start of this comic – but there’s a big difference in tone between the two – and it’s illustrated when an early fight gives way to conversations between a cautious Alfred and a wounded Wayne. There’s more room for the characters to breathe, and the plot embraces Batman’s philanthropic side, with a scheme to rebuild and revitalise Gotham.

I’ve found the first two books inconsistent. The eponymous Arkham Knight was introduced menacingly in #1 but didn’t appear in #2 and the first half of the second book saw The Joker reading his will – and, while that sounds great, its rambling meant it didn’t live up to expectations.

The second half of #2 was better, with Jim Gordon in crisis and Batman hooking up unexpectedly with Harley Quinn. There are appearances from Killer Croc and The Penguin, and it’s the stronger section that’ll get me buying #3. 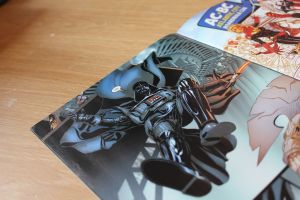 Few new books have captured my interest like this. It started even before I’d got the first issue – Kieron Gillen is someone I’ve been reading since I was about twelve years old, albeit about videogames. I’m aware of his impressive comics reputation, and I was excited to see what he made of Vader.

He’s turned a villain into an anti-hero, and the story evolving over the first four issues is exciting. Crucially, it concentrates on Vader himself, with few subplots and little periphary. A couple of the secondary characters are familiar from the films, a couple more have been introduced, but that’s it. 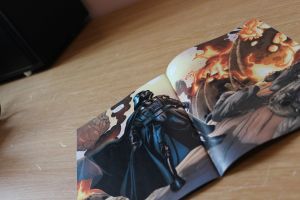 You’re not supposed to like Vader but, come the end of #1, you cheer and sympathise with the big lug – he’s blasted his way past enemies and been told off like a child.

Vader became a proper badass as he infiltrated a droid ship in #2, and #3 felt pivotal – it introduced new characters, and saw Vader regaining his confidence as he fought oppressive Imperials. The latest book, #4, develops the new characters, but that’s no bad thing – they’re all interesting. 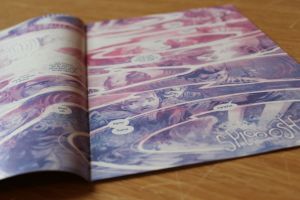 I’ve not read many superhero books yet, as they’re mid-series, but Hawkeye has just started. It piqued my interest: I love Agents of S.H.I.E.L.D and The Avengers, and I was keen to learn more.

I judged this book by its heavily-advertised cover, though, and I didn’t get off to a good start. I wasn’t a fan of the insipid art, and sadly those feelings carried on inside. This book jumped between two styles: watercolour pages flashed back to Hawkeye’s childhood, with a bolder, simpler, traditional style used for Hawkeye’s modern adventure.

The watercolours look pretty, but these sections lack detail and direction – and the comic style, which should suit me more, suffers from a lack of detail in its environments and characters. 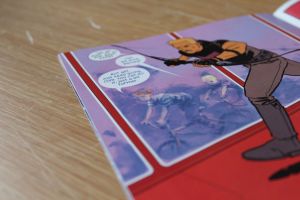 The story seems standard but uninspiring – Hawkeye infiltrating a Hydra base, interspersed with flashes to his childhood. The book only regained a spark of interest over its last pages, where the two art styles blended together, Clint Barton’s childhood chases mimicked in Hawkeye’s rushes through the Hydra base, and the two crashed together over the last few panels. It was an improvement, but it’s not enough to drag me back for #2. 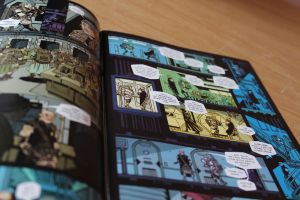 I wasn’t expecting much from this – I’m normally not fussed about thrillers, and I was more excited about that week’s debut of The Surface.

It surprised me. The art is dark, dank and has weight, with detailed wide shots alongside innovative frames that smartly represent a descent into the bowels of a dirty mining ship.

The characters are interesting – mostly female, and mostly kick-ass – and the plot revolves around a mysterious mining planet and a missing person’s investigation. It’s intriguing in #1, but #2 ramped up the fright factor, with more missing folks and a conclusion that teased otherworldly involvement.

Anecdotal material throughout works hard to add context, so I’m sold on the scale of the setting – even though the action hasn’t moved beyond one ship.

The main characters are guilty of slipping into cliche from time to time, but that’s my only criticism. I can’t wait for more.

This book’s premise concerns a trio of hackers hunting for holograms in the middle of Africa, but its unique sci-fi setting proved disappointing. 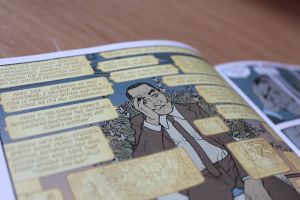 The first issue underwhelmed and confused. The panels are busy and the dialogue is packed with ideas and references, but there’s just too much happening – the first pages demand the reader keep up with three sets of dialogue despite knowing little about the characters or the setting. It’s a full-on introduction that left me floundering, and it felt like the plot got pushed to the background.

I’m buying a lot of comics at the moment, so I’ve got to be ruthless. The Surface’s opening issue had its moments, but there’s not enough here to tempt me back – the lack of concrete plot and overwhelming and context have seen to that.