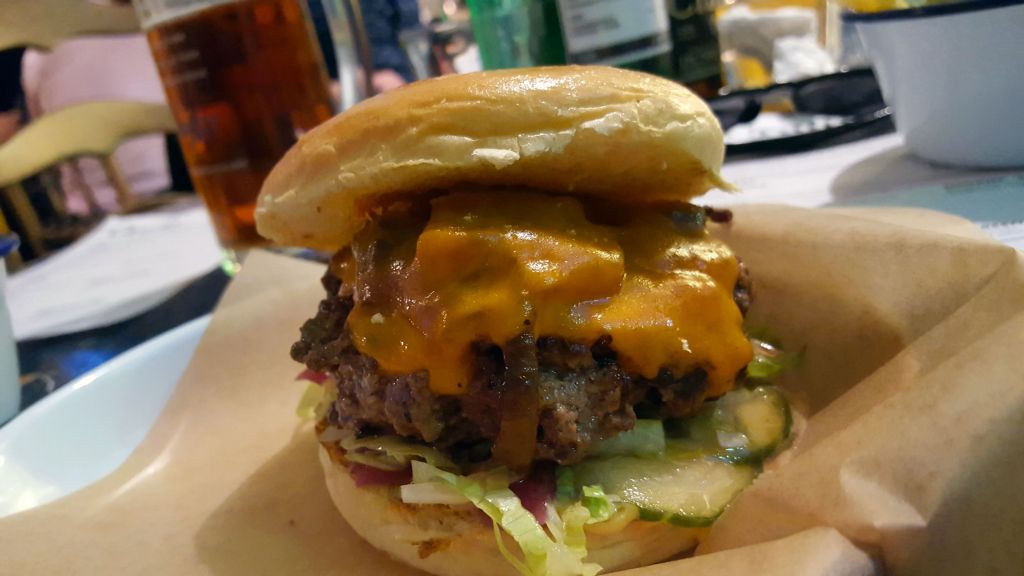 I’ve not blogged on food before but, well, anyone who knows me will know that I like the stuff – and I love living in Leicester, because it’s got a great food scene that’s expanded over the past couple of years.

The area around St Martin’s Square had been neglected up, but that’s changing. Several interesting new shops have moved in – including Deli in the Square and lush cocktail lounge 33 Cank Street – and one of Leicester’s three Pizza Express branches has closed and will shortly be replaced by Grillstock. I’m super excited about that. 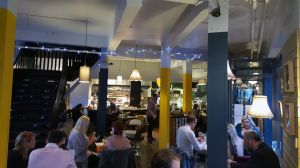 St Martin’s Coffee has been one of the square’s stalwarts and we’ve popped in a couple of times, but I wasn’t a regular despite its top-notch reputation. I saw a tweet a couple of weeks ago about the expansion of its Crafty St Martin’s pop-up into a permanent restaurant and, well, I knew I had to get involved. One of Leicester’s best cafes branching out into burgers? Yes please.

We were lucky enough to be invited to the launch evening. The atmosphere was great – friendly, warm and inviting – and we were sat on a larger table with a couple of other folks. One of them was Adam Garratt, who’s already reviewed Crafty St Martin’s on his own blog, and we were soon talking. With everyone attending sharing excitement about the new opening, pairing people up was a great idea. The cafe has recently been refurbished, and it looks great: homely, reclaimed furniture, neat touches, and a roasting room upstairs where you can see the coffee being prepared. 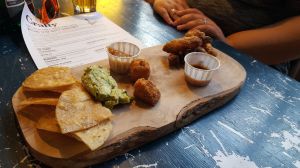 The preview evening had a special menu which kicked off with a starter sampler – three small portions of the firm’s tastiest morsels on a single slab. The home-made nachos were crisp and wheaty, and the Korean-flavoured chicken wings were excellent; hot and crispy with a hint of chili. The star of the starters was undoubtedly the Pigcorn Poppers – squares of pork belly with a chili and pineapple dipping sauce. They were juicy, tender and delicious.

Three of Crafty St Martins’ burgers were available on the night, too: the Farmyard Jam pairs beef with maple and bacon jam, sauce and Red Leicester cheese, the Krispie Klucker mixes chicken with spiced Rice Krispie crumb and slaw, and the Smokin’ Shroom serves up a roasted flat mushroom topped with a smoked Applewood croquette, pickled red onion and more. It’s a menu to salivate over. 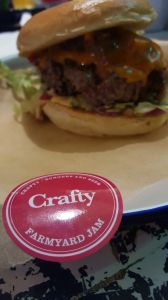 The burgers are made on-site with local meat and it’s obvious that great care has been taken. They’re thick, tender, juicy and moreish, chunky, well-flavoured and well-textured, and they’re cooked medium rare, with the glistening brown exterior giving way to inviting pink inside. That’s the way it should be and, because the people doing the cooking know this, we didn’t get a choice in the matter.

Topping the burgers with Red Leicester cheese is a tasty touch, and it’s all held together in a shiny brioche bun baked by local firm Brucciani. It’s a juicy, messy affair, and I almost didn’t make it through the burger without having to deploy my cutlery – but, honestly, I don’t mind. Good burgers are never neat.

Our only qualm about the burger was the maple onion and bacon jam. We couldn’t really taste the bacon and, aside from some sweet flavours throughout, we didn’t get the hint of maple either. 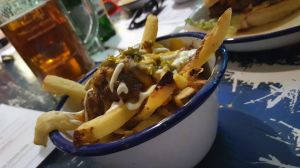 The chips were equal parts crisp and soft, and the pulled beef on mine was great, with great hunks of beef mixed in with smaller strands. It tastes top-notch and has plenty of texture, and the dominant flavours of potato and beef weren’t overwhelmed by sour cream and mustard.

The beer and cider we tried was local and refreshing, and the meal was followed up by a tub of peanut and chocolate ice cream. It’s a special flavour produced for Crafty St Martin’s by Gelato Village, which is just around the corner, and it’s delicious, although dominated by peanut flavours rather than any cocoa. 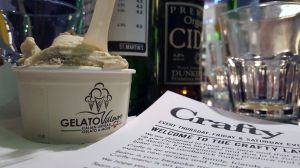 Crafty St Martins delivered stonking starters, a messy, delicious, addictive burger and great side orders, and the firm’s approach to local suppliers, good food and top-quality drinks should be commended. I’d say we’ll be back, but we went back in two days later for some coffee and cake. They were fantastic, and the staff remembered us, said hello, and treated us well. Yep. It’s brilliant.